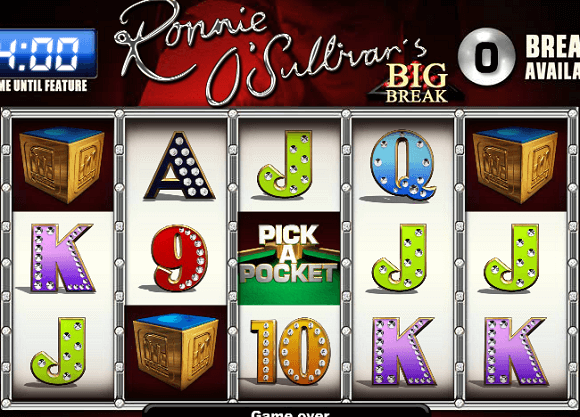 Avid snooker fans who also enjoy playing slots at online casinos are the target market for the video slot game Ronnie O’Sullivan’s Big Break, and they may also be the only ones who know who Ronnie O’Sullivan is without having to search online. However, the game offers some interesting rewards that may attract even those gamers who aren’t big snooker fans.

Nicknamed ‘The Rocket’ because he plays so fast, Ronnie O’Sullivan is one of the biggest names in modern snooker. A snooker prodigy, he came to notice in 1985 when he made his first score of more than 100 on a break: at the age of just 10. Five years later, he made his first maximum score from the break, and he turned professional at 16. He has won over 28 major titles, and his speciality is big scores from the break, hence the title of the Ronnie O’Sullivan’s Big Break slot.

Ronnie O’Sullivan’s Big Break uses the familiar card values 9 to A as its low-value icons, decorated with sparkling diamonds. A cue chalk, a frame of red balls and the word Wild complete the symbols. The Wild can substitute for other ordinary symbols, but for combos of two, three, four of five Wilds from Reel 1 on a payline, the player wins 100X, 500X, 2,500X or 10,000X the line bet.

Using five simply framed reels and 20 paylines, Ronnie O’Sullivan’s Big Break plays out in front of a tinted close-up photo of Ronnie bending over a snooker shot, a swirl of red in a deep black background. Players can vary the number of paylines they play, as well as the bets per line. These can be adjusted at several levels from 1 to 500 coins in the same way options are set up in sports betting from mobile.

The new screen is a snooker table set up for the start of a game, seen from above. The player must strike the cue ball into the red balls, and attempt to sink some in any of the table’s six pockets. Each pocket has a different multiplier, and each ball sunk wins the player that multiplier times the line bet. After each break, the balls reset and the player gets another break, until they have used all the breaks they racked up.

The second Ronnie O’Sullivan’s Big Break bonus symbol is a view of a snooker pocket, and it is a Scatter. Three or more in any position trigger the Pick A Pocket Bonus. If it is activated, the player must pick one of the triggering Scatters to reveal how many free spins they will get; it could be 10 or more. The free spins then play immediately, with all wins tripled. Players who love adrenaline rushing online slots games will certainly enjoy playing this nerve pinching game.