Tornado Farm Escape introduces the story in an introductory video that shows animals grumbling about the daily toils of farm life. A tornado suddenly hits the screen sweeping up the animals who see this as an escape from the daily grind. They, and other swept up items, are seen as symbols floating in the tornado. The reels are transparent and show the farm’s neatly ploughed fields and buildings in the background.

Tornado Farm Escape was developed by Net Entertainment and is a five reel online slot game with three rows, 20 fixed pay lines and two bonus game features as well as substituting wild symbols. There is no free spins feature but a re-spin feature is available with multiplier awards that are possible. There is also a random bonus game.

With the Tornado Farm Escape pay lines being fixed they are all active during the game. The bet value can vary however with anything from one to ten coins being placed on each pay line and the coin sizes ranging from 0.01 to 1.00. This makes the minimum bet per spin a value of 0.20 while the maximum bet per spins is a value of 200.00.

Tornado Farm Escape has a max bet feature for automatically placing the maximum number of coins and spinning the reels once. An auto play feature is also available and allows the reels to spin continuously for a set number of spins.

Tornado Farm Escape features 10 regular symbols, all of which are items floating in the tornado. These symbols include a chicken, a sheep, a cow, a pig, a horse, an armchair, a radio, a wellington boot, a suitcase and a stool.

The Tornado Farm Escape online slot wild symbol is the television set symbol. This symbols will substitute all of the regular symbols if needed to complete a winning symbol combination. The wild will represent the special cloud symbols as a substitute. 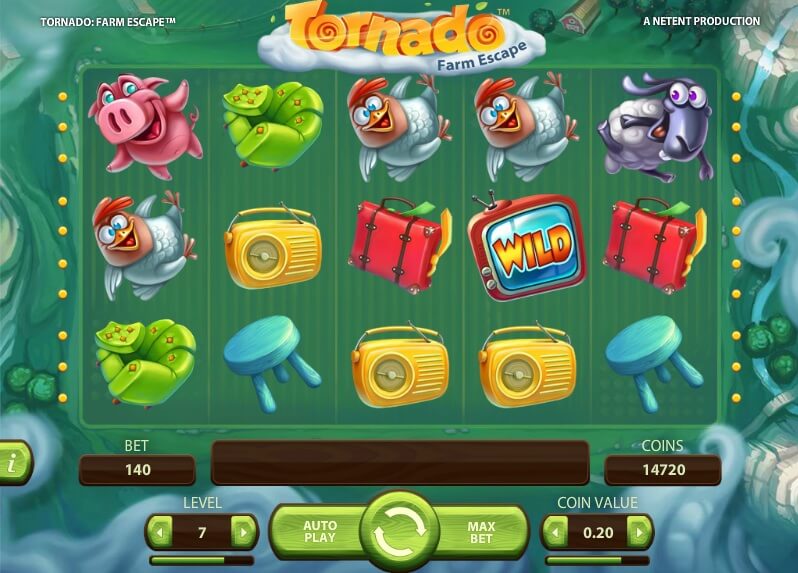 Two special Tornado Farm Escape symbols are hot and cold clouds indicated by red and blue arrows. The hot cloud must appear on reel one with the cold cloud appearing on reel five to trigger the Tornado bonus game feature.

Tornado Farm Escape has a randomly occurring bonus feature called the Storm feature. When this feature occurs a mini storm blows onto the screen.